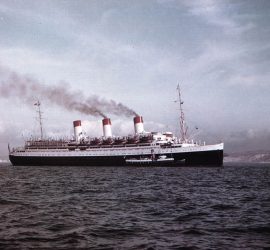 1927 – 1945 / As the largest and fastest liner on the South American run, this German liner saw great success during her early years. She remained stationary during World War II, and was tragically bombed in 1945 while packed full with prisoners transferred from concentration camps. More than 5,000 lives were lost.