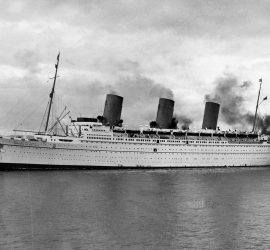 1931 – 1940 / Launched as the Canadian-Pacific Line’s largest ship to date, the second Empress of Britain quickly became a popular ship for both crossings and cruises. Sadly, her career was cut short by World War II, when she was torpedoed and sunk while employed as an allied troop transport.