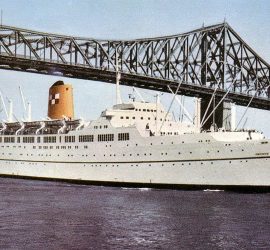 1957 – 1975 / Also known as Ocean Monarch / Another post-war ship that was built when the economy had recuperated, the Empress of England helped modernise the Canadian-Pacific fleet. Later in life, she was sold and refitted as a dedicated cruise ship, but lasted only a few more years before she was sold for demolition.