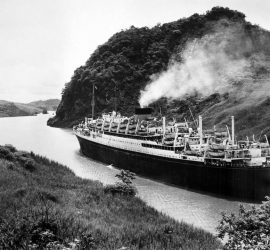 1932 – 1956 / The second vessel of White Star’s modern pair of motor ships, the Georgic was to be one of the last ships to sport the company livery. Bombed and badly damaged during World War II, the ship was refitted and emerged with a single funnel after the conflict. She was sent to the breakers in 1956.