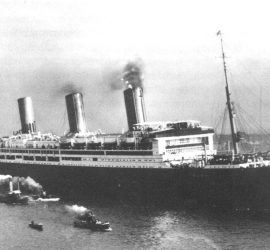 1914 – 1938 / Also known as Leviathan / The second ship of the great HAPAG trio, Vaterland was seized and used as the allied troop transport USS Leviathan during World War I. Handed over to the United States Lines after the war, she became the company flagship and the largest ship in the US merchant fleet.