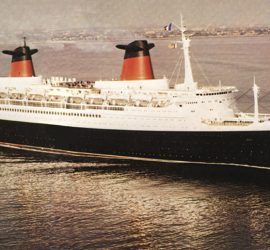 1962 – 2006 / Also known as Norway / Another French masterpiece, the third France was built at a time when ocean travel was dwindling. When facing an early retirement, she was instead bought and transformed into the cruise ship Norway that would revolutionise the industry and remain in service into the 21st century.