Upper decks of the Californian, looking towards the bow.

The bridge of the Californian.

Californian photographed from the Carpathia on the morning of April 15, 1912.

One of the smaller companies running a regular service across the North Atlantic during the early years of the 20th century was the Leyland Line. Their speciality was cargo and the company’s vessels did not carry many – if any at all – passengers.

In the middle of 1901, the Leyland Line commissioned a new liner to be built by the Caledon Shipbuilding and Engineering Company Ltd. Laid down as the yard’s number 159, the success of the new ship was vital for the shipbuilding-company’s establishment as a major ship-constructing centre.

The new liner would have a gross tonnage over 6,200 and the length would be almost 450 feet. Not too impressive for the day, though – the largest ship in 1901 was the White Star liner Celtic with a gross tonnage of 21,035 and a length of 700 feet. However, the Leyland liner did not have to be a showpiece to attract people – like so many other ships in the company, she would only carry a very small number of passengers. During the construction, the new liner’s upper bridge deck was lengthened to include nineteen staterooms. The ship would be certified to carry 47 passengers. The passenger accommodation was on the ship’s port side, while the crew resided on the starboard side. The rest of the space on board was reserved for cargo – mostly cotton. The crew compliment was 55.

The name for the new ship followed the trend of Leyland liners. In nine-inch brass letters, the name Californian was spelled out, under the counter stern, and on both forward sides.

While the Californian was under construction, the Leyland Line was purchased by the ever-expanding I.M.M. (International Mercantile Marine), under the leadership of the American Junius Pierpont Morgan. To blend in with the other ships that had been devoured by the I.M.M., the Californian’s passenger capacity was further increased.

The Californian’s sea trials were carried out January 23, 1902, and then she prepared for her maiden voyage. On January 31, she left Dundee, Scotland and arrived safely at New Orleans on March 3. The return trip to Liverpool, which was her company’s homeport, was completed on March 21.

The few passengers the Californian carried were given a high standard during their crossing. First, the whole ship was equipped with electric lighting. The smoking room had panelling in the finest oak, upholstered in embossed leather and the floor tiling was made out of rubber. The dining room was done in Hungarian ash and satinwood with teak frames, and upholstered in moquette.

For her first ten years in service, the Californian had four different captains. By 1911, the master was Captain Stanley Lord – a man who would become world famous for his actions the next year.

The year 1912 did not start out well for the Californian. On February 20, she had left New York with a cargo of cotton, but when she arrived at Le Havre, France a month later, the cargo had been seriously damaged. Fifty-five bales of cotton had been sea damaged and another 567 bales were ‘country damaged’.

After this voyage, the Californian sailed for Liverpool, which was to be her starting point for the next Atlantic crossing. On April 5, the Californian departed Liverpool for Boston. On April 14, the ship encountered ice and had to stop completely. Ever since a few days ago the Californian had received ice-messages from other ships on her wireless station. Other vessels in the area at the time were La Provence, Mount Temple, Ypiranga, Carpathia, Frankfurt, Baltic, Prinz Friedrich Wilhelm, Olympic, Celtic, Caronia, Cincinnati, Asian, Virginian and the world’s largest ship – the White Star Line’s 46,000-ton Titanic.

The Titanic had a tight schedule to live up to, and did not stop as the Californian had done. She continued at high speed through the icy waters until she hit an iceberg, which mortally wounded the great ship. The Titanic immediately started to send out assistance via her powerful wireless station. The time on board the Titanic was at the time of her first sent message 12.15 p.m., and the call was received by French Line’s La Provence. The White Star liner continued to send out these distress signals, but as the Californian’s only wireless operator Cyril Evans had turned in for the night, the small Leyland liner could not receive the messages.

At 10.30 – Californian’s time differed roughly twelve minutes from the Titanic’s – Captain Lord had left the bridge and reported a light he had seen to the third officer. Lord thought it to be an approaching vessel, while the other officer saw it as a star. As the vessel approached the Californian, it was determined by Lord that it certainly could not be the Titanic – this looked like a much smaller vessel, something like the Californian in size. They estimated the distance to be about five miles.

During the night, the officers on watch on board the Californian saw several rockets being fired from the ship nearby. No one wanted to wake Evans, and so they tried to make contact using a Morse lamp. After several attempts without getting any reply, they gave up. They assumed the rockets to be fired during a party on the other vessel, or that it was company signals. The rockets fired were white, which was not the international colour for distress.

At 1.50, Californian time, the officer on watch noticed the other vessel to be steaming away quickly. If this was the Titanic, it could have been when she started to go down quickly, creating an illusion for the people on board the Californian. However, historians debate if it was Titanic that the Californian saw. Some include a third vessel, and many think it to be the Norwegian wood sailing barque Samson. On his deathbed many years later, the Samson’s chief officer Henrik Naess swore he saw the Titanic lying nearby. If this is the truth, it puts the Californian out of any blame for not making her way to the Titanic. The Samson had sailed away quickly from the scene, as they were fishing illegally, and thought the nearby vessel to be the coast guard. So therefore, the Californian might have seen the Samson sailing away, and not the Titanic sinking.

The Titanic finally went down at 2.20 a.m. The Cunarder Carpathia was racing towards her, but could not reach the wounded giant in time. She arrived at the Titanic’s last known position at 4.00 a.m. to save the 700 survivors in the lifeboats. The Californian did not know anything about the disaster until between 5.00 and 5.30 a.m. Then wireless operator Evans turned on his equipment again, and immediately received word that the Titanic had sunk in his vicinity at 2.20 a.m. The Californian steamed to the given position at once, but found only the Carpathia, who was done with receiving all the survivors. The Californian searched the area for a while, but as she did not find anything, she returned to her duties.

During the American and British disaster hearings afterwards, Captain Stanley Lord was accused of not having helped the Titanic, in spite that he had been so close. Captain Lord naturally protested, but the final word was said by the investigation authorities. Lord tried to clear his name, unsuccessfully, but as time went on he thought the world had forgot about the incident with his ship. But in 1955, the book ‘A Night to Remember’ hit the screens, followed by a feature film in 1958, and Lord was certainly not depicted as the good man. Stanley Lord again turned to the British sea officer’s company, for another try to clear his name. The company worked with his case until only a few years from now, when they came to a conclusion. The Titanic’s wreck had been found in 1985, thereby giving the exact position and with this in mind, Stanley Lord was completely cleared. It would have been impossible for him to reach the larger liner’s position in time through the ice-field, even if he would have been notified at a very early stage. But at the same time, he was criticised for not having woken wireless operator Cyril Evans up in time.

After the disaster, the Californian continued her original service. In 1914, the First World War erupted with the shots in Sarajevo. The Californian sailed successfully until November 9, 1915, avoiding both mines and torpedoes. On that fateful November day, she was sailing in the waters off Cape Matapan, in the Mediterranean, when she was hit, without any warning, by torpedoes from an enemy submarine. The Californian went to the bottom with the loss of one man.

1900 – 1925 / A large yet modest ship in the Cunard fleet at the time, the Saxonia was a workhorse that remained with the company until her scrapping in 1925.

1900 – 1925 / Also known as Victoria Luise and Hansa / An early German speed champion, the Deutschland suffered technical issues which affected her popularity. Having been used as a cruise ship in the years prior to World War I, she was eventually sent to the breakers. 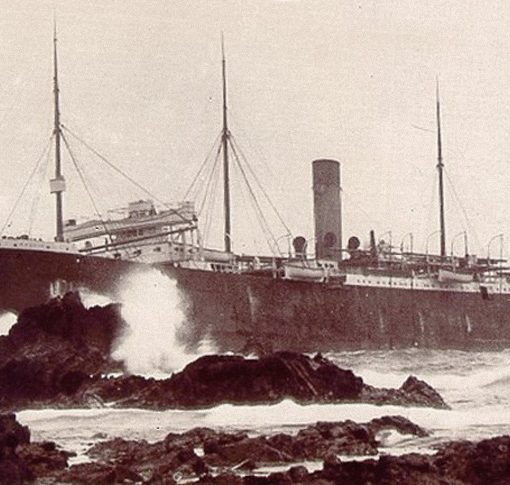 1901 – 1942 / A combined passenger-cargo vessel, the Suevic was not the most glamorous of ships. However, her place in maritime history was cemented by the remarkable salvage operation that saved her career when she ran aground in 1907.