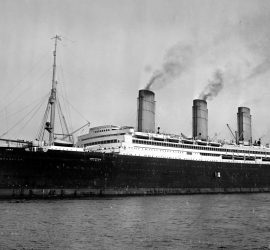 1913 – 1938 / Also known as Berengaria / The first of Germany’s great pre-war trio, their defeat in World War I saw the ship transferred to Cunard ownership and given a new name. She flew the British flag for the rest of her career, and was sold to Jarrow shipbreakers in 1938.